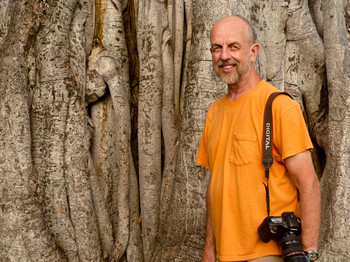 John Stottlemyer has always known he would be an artist. He had his first "one-man show" at his elementary school when he was seven years old. John graduated from the University of Minnesota with a BFA in drawing and painting and worked in advertising and marketing communications as an illustrator, graphic designer, creative director and product photographer.

John shot his first travel images of Spain and Morocco when he was twenty years old and became passionate about outdoor photography after exploring the Colorado Plateau in Utah and Arizona. He was instantly captivated by it's magnificent color and form, visual diversity and fascinating history. Also at this time, he became inspired by the work of Michael Fatali, David Muench and Jack Dykinga, leading fine art landscape photographers of the American Southwest. John currently conducts photographic workshops and custom instructional trips in the same  redrock country of the southwestern US. He also teaches workflow and composition for film and digital photographers, and has recently published his first coffee table book titled Faces of the Grand Plateau, available in print through BLURB.com and as an e-book (by the same title) on the iPad, through Google Books or Kobo.

John finds his subjects in Europe, Africa, India, Southeast Asia and the Americas. Besides dramatic and unique landscapes, he loves the character of the old world and is fascinated by indigenous cultures, worldwide.

John loves to talk photography and will readily tell you it is all about light, timing and composition. He considers his subjects to be gifts and says he is merely passing them forward. In the field, John carefully studies the way light defines his subjects and often returns many times to a location before it's right. He states his personal strength is composition and spends a long time considering his subject - often sans camera, to determine the optimum camera angle before releasing the shutter. He admits it can take many visits to a location before achieving an image worthy of publishing. One remote ruin in the desert southwest required literally ten years of annual visits before all elements came together for an acceptable image.

It is John's sincere hope that his work inspires you to travel and enjoy the wonderful destinations he cares so deeply about. Please don't hesitate to contact him directly. He'll answer any questions you have and gladly share his stories about your favorite image or photographic destination.
© WorldView Photography
Powered by ZENFOLIO User Agreement
Cancel
Continue